The beautiful dawn sent by Spirit: our Alaskan cruise 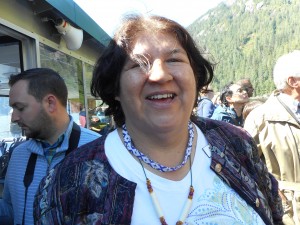 On Sunday, 19th July, my wife, Leigh, and I were honored to meet an amazing Native American woman of the Haida Nation of Alaska who was to have a profound effect on us. Her name is Saand laanaay, meaning ‘beautiful dawn’, and we found her to be indeed a beautiful soul, who shared her belief system with us and taught us much. Her American name, by which she is known, is ‘Merle’.
We had been guided by Spirit to visit Alaska on a cruise ship in order to absorb the ancient knowledge held within the Native American burial grounds. On the second day of our cruise, the ship had docked at Ketchican in Alaska. We had the day free to leave the ship to explore and decided to experience a boat trip to the Misty Fjords National Monument. The name belies its size. It comprises a 3,570 square mile wilderness sanctuary within the Tongass, that remains completely unspoilt with astounding sea cliffs, steep fjords and 3,000 foot-high rock walls jutting out of the water. Waterfalls fed by receding glaciers abound.
It was a long trip, even in a fast catamaran, and we made the most of the time sharing with our new Haida friend who was on board as one of the expert guides as well as selling the bead necklaces she had made.
Right away, she knew us to be shaman and delightedly opened up, as we shared experiences and knowledge. We were drawn to buy one of her bead necklaces which we could feel had especially strong positive energies. Part of the necklace was made from the wood of the most important sacred medicinal plant to Alaskan Natives, of the Oriental Ginseng family, known as the ‘Devil’s Club’. The beads comprised a variety of beautiful colors.
We knew the necklace had been waiting for us, and Merle nodded in agreement.
She is a wise woman of many parts, having served for twelve years on the Central Council of the Tlingit and Haida Indian Tribes of Alaska.
We were fascinated to learn of the ancient, complex culture and socio-economic structures of the Haida people. Their belief system includes reincarnation and transformation with animals and birds. Merle, her mother and siblings are affiliated with Ravens and as such Merle was destined to marry an Eagle.
Each Haida person has many affiliations, Merle being of the Brown Bear House, with affiliations to five villages.
As we reached the destination that had been planned for the cruise before turning around and going back to Ketchican, we were awe-inspired at the magnificence, size and sheer beauty of the fjord.
As we stood in humble silence taking in the magic of this special place, we were amazed and honored to be told by Merle that she had informed the Captain, a woman named Jeanette, and other members of the crew that there were two shaman on board. Jeanette had decided to extend the trip by visiting the place where a shaman, who had lived 200 years ago and died when over a hundred years old, was buried.
We were told by Merle that it had been the custom of the Haida people at that time to cremate the dead except in the case of shaman, who were mummified.
The boat went very close to the sheer rock where the mummified body was interred.
There were over 50 other sightseeing passengers on the boat and the Captain had explained over the public address system what was going on with regard to this unexpected diversion. It was interesting to see how interested they were, crowding the deck on the relevant side of the boat, taking pictures and listening keenly to the commentary from the Captain.
As we approached the burial place, we both felt the amazingly powerful energies engulfing our bodies, chakras and auras, akin to electricity. We knew that the knowledge that the long-dead shaman had acquired was being downloaded to us.
Spirit had indeed guided us to this magical place, and put Merle in our path to facilitate all that we were meant to experience that day.
As the boat made its way back to Ketchikan we asked Merle if she would like us to heal her and clear negativity that others had put on her.  She concurred, and it was wonderful to see how she smiled and visibly lightened once healed.
As we stood on the dock near the cruise ship, we exchanged gifts. Merle gave us her prized symbol of her time on the Central Council of the Tlingit and Haida Indian Tribes of Alaska. During our conversations with Merle that day we had talked about the book, Journey of a Shaman, and she had been keenly interested, stating that she would buy a copy and encourage others to read it. We gave Merle an autographed copy of the book
We shall never forget Merle, Saand laanaay, ‘beautiful dawn’ or any other part of that magical day.