The day after our meeting with Karolina, it transpired that she had shared her discussions with us and her copy of Journey of a Shaman we had given her with her friends. We were approached by Erica,

one of Karolina’s friends, an Australian woman, who had wanted to find out more about what we were now doing. She was particularly interested in hearing about our work with the First Nation people in Whistler who came from the Squamish and Lil’wat nations.

We visited the Squamish and Lil’wat Centre. It is a remarkable place which is staffed exclusively by people from those two nations. The territories of those nations overlap in the area around Whistler and their respective Chief’s’ had agreed a protocol whereby they would share the territory and would work and live in harmony.

The two cultures are very different, but they share beliefs in a deep respect for the land and its many gifts, centuries old traditions, ancient cultures, craftmanship and beautiful art.

Their relationship to the land and to each other as neighbours is recorded through oral history dating back thousands of years. One of the main differences between the two cultures is that the Squamish are ocean people as reflected in the size and strength of their canoes and methods of fishing. The Lil’wat people are inland people as reflected in their light canoes suitable for inland lakes and rivers used for fishing and transport.

The Squamish territory is vast covering approximately 2600 square miles encompassing much of Greater Vancouver and the entire Squamish valley. To the North, the Lil’wat nation territory sits between two formidable mountain ranges and covers nearly 2 000 000 acres, an area approximately 1/4 the size of Vancouver Island. Attached are some pictures of First Nation symbols. 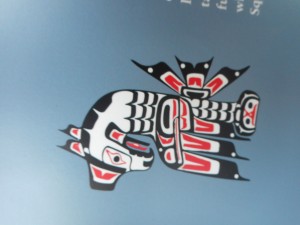 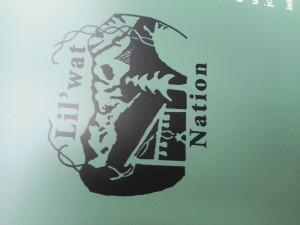 The picture above shows the logo of the Lil’wat Nation. Their culture revolves around the circle of the medicine wheel. In the center of the logo the Cedar tree stands tall as it is the core of their culture. On the right the Pit House represents their people and their homes. On the left the drying rack represents one of the many ways they preserve their foods, such as Salmon. Mount Currie towers over them and protects them. The smoke represents the Lil’wat Nation joining hands to complete the circle.

This shows John and Leigh Norseman standing on the “Rooftop of the World”.

9 Responses to Where Rivers Mountains and People Meet – Part 2