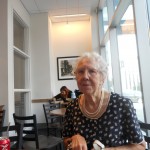 Wherever we are we enjoy walking, exploring and meeting people who cross our path. We 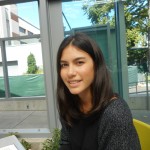 love the city of Seattle where we rent an apartment as our “home away from home” during our  six month book tour in the United States and Canada. We shall now be away from Seattle for thirty five days visiting Orlando, Toronto, Maine and New York before returning to Seattle towards the end of October. It seems timely to share with  you our encounters with two interesting people from Seattle, Mary and Stephanie. (Left and right respectively).

We were having tea in a cafe when Mary joined our table. We soon got chatting and Mary told us some of her anecdotes and then chose to inform us that she thought of herself as being very stubborn. We found her to be a very determined and delightful lady. She shared with us her strong views that quality of life is more important than extending longevity at the price of giving up things that one enjoyed. Many of the examples from her own experiences emphasized her point and it chimed with our belief that one should live every day as though one knew it to be their last.

We were having dinner at a Bistro near the Space Needle a few days later. We were waited on by a wonderful young woman named Stephanie. She was very keen to enter into a deeply spiritual conversation with us. She had already learnt some important lessons of her journey through life. These included learning that one cannot placate negativity but instead to learn to say “NO” and mean it. She had put that into effect by walking away from a negative relationship at which point she had met a deeply spiritual man who is now her partner. She now had both joy and positivity in her life that allows her to be herself. She had learned another vital lesson, namely that one has to close one door before the new door can be opened. She wanted to learn more and we met her for coffee the next morning while she was not working in order to continue the conversation and to answer her questions. The fact she was asking the questions meant she was ready to hear the answers. We knew that we were meant to give her a copy of “Journey of a Shaman” and she was delighted. She informed us she and her partner were going to read it together. Her parting comment to us was that she worked in order to live and not live in order to work.