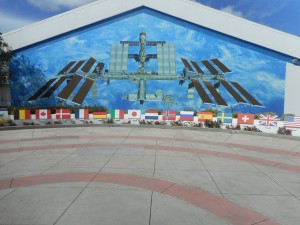 Today, September 23, we re-visited the Kennedy Space Center near Orlando. We were so impressed with what we saw on Monday that we felt compelled to return to see more.

The picture on the left shows what the International Space Laboratory looks like with the flags of all the nations currently participating with scientists’ working together researching all that is needed to be known in order to send mankind to Mars and beyond.

The two highlights of our day were to experience a shuttle space-launch simulator and an astounding 3D movie that detailed NASA’s plans to put mankind on Mars in the 2030’s.

The simulator provides a breathtaking experience that we would recommend anyone visiting the Kennedy Space Center to take part in. The experience that begins with a countdown before lift-off, the lift-off with powerful vibrations and G-Forces and then the calm as the fuel tanks and rockets drop away. The roof of the space shuttle then opens to reveal planet Earth as seen from space and the stars beyond. We would advise that you have lunch after the experience! The movie shows how mankind will live and survive to return from the 6 month each way journey to Mars and the time they would spend on that planet before returning. The technology involved is unbelievably advanced compared with what was available for the moon landings. 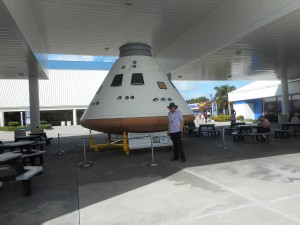 The picture on the left shows John standing beside a life-size replica of the Orion crew module which is huge compared with the Apollo modules. In order to sustain life for the crew for the six month journey to Mars, a huge inflatable recreational and life supporting module would be inflated once the Orion capsule was in space.

What we found at the Kennedy Space Center surpassed all our expectations and we found the commitment of all those involved inspirational and a massive example of the truth of the statement “that there is nothing that one cannot achieve if one removes the blocks in one’s own mind”.