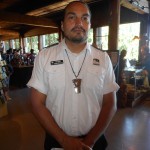 The picture is of a Native American of the Haida Nation known as Haida Eagle to his friends. We shared with him a day of incredible spiritual connection and mutual learning. We witnessed a pageant of traditional storytelling, dance, drumming, costumes, and Shamanic ritual involving Spirit, mind, body and much more.

We had booked a boat trip that would take us to Blake Island that lay eight miles off Seattle waterfront, in order to visit Tillicum Village that has a long history of connection with Native Americans. Shortly after boarding the boat a tall male of striking appearance walked past us and there was instant recognition. We had a spiritual knowing that he was a full-blooded Native American with powerful spiritual ability and he looked at us in unspoken recognition. We entered into conversation and he told us his name, Haida Eagle. We knew immediately that our meeting was meant to be and huge positivity would manifest.

We shared with him our Shamanic journey and gave him a copy of “Journey of a Shaman”. He was delighted and told us that it was exactly the type of book he enjoyed reading. He shared with us much interesting knowledge concerning the history and traditions of his people and their way of life. When we arrived at Tillicum Village we saw the huge

Longhouse made from Cedar wood with totem poles, large open cooking area and many artifacts. We and the other visitors were then treated to a delicious buffet lunch that featured wild salmon cooked in the traditional way.

After the meal we were greeted to a magnificent display that painted a living picture of the belief system of these Native Americans’ in their own language. Haida Eagle’s Haida name is Gaiellhdah. The storytelling was communicated by way of dance, drumming, chanting, exotic

costumes and also some explanations in English  of the role of the Shaman within their culture. The link between Spirit, mind and body came through very clearly by the end of their magnificent pageant.

As we made our way out of the Longhouse we met another striking full-blooded Native American whose English name is Nancy. Her mother is from the Dakota Nation and her father from the La Ronde Nation. As you can see from her photo, she is a bright, bubbly, happy lady 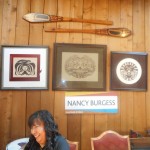 who has now excelled in the art of hat and basket making in the traditional Native American style. It transpired that she knew Merle from Alaska who featured in our first blog. She commented that our visit had much synchronicity.

As we re-boarded the boat to return to Seattle we agreed that we needed more time to fully explore and understand what the people of Tillicum Village had to teach us. We vowed to return as there was much more we needed to share with these wonderful people. During the boat trip back we had a long conversation with Haida Eagle and he promised to put us in touch with like-minded people in both Seattle and Florida. We agreed with him that we would meet again and in the meantime would stay in touch.